Hi everyone, I got this jacket about 2 years back, I was surfing ebay when I found this jacket, the seller said it was a trial uniform, regardless I bought it because of the odd neon colored blotches. When I received it I immediately noticed that the material was a lot different than the typical current issue Flecktarn uniform, it was a lot stiffer and had a different color scheme, I instantly went to look at the tag and found that it had been drawn over by a black marker. So now its anyone's game. Any help would be great. Ill try and get some pics up of the tags and close ups. Thanks. 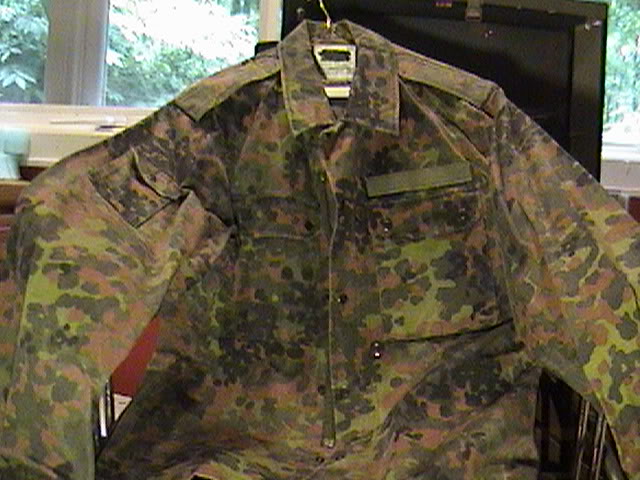 Is the nsn readeble?
It looks like a Dutch army variant/velcro on the left brest pocket.
And then its very rare and expensive.
jeroen from holland
CollectinSteve

A close up of the tag would be very good to have. But here's my guess.... it's an early Chinese copy. The primary tipoff to me is the stiffness of the fabric. But there are other things as well: 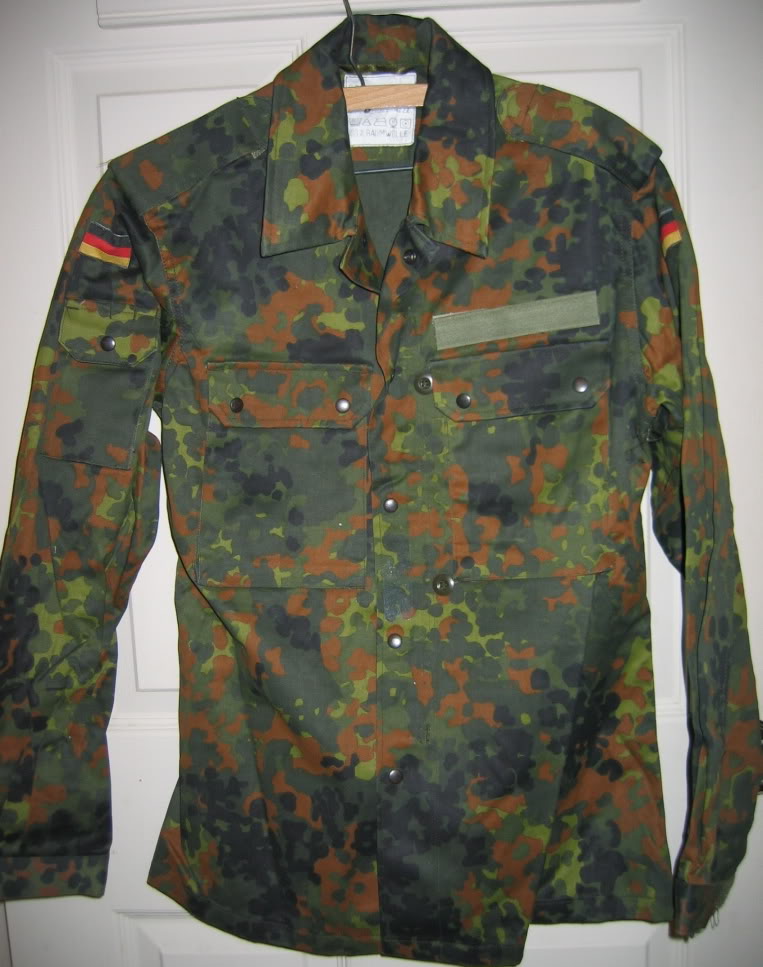 I don't know what the full story is with this item, but from what I can tell it was made in the early 1990s for the collectors market at a time when the real Flecktarn uniforms were extremely hard to find (and expensive... I bought a real set for $120 when in Germany!). The Chinese set is near exact copy but made from a 100% cotton fabric instead of the original's cotton/polly blend. The workmanship is generally quite good. The manufacturer's tag, on the other hand, is a bad fake, which is what gives it away as a copy more than anything else.

The Flecktarn trials stuff is quit rare and is cut similar to the old Moleskin uniform, including buttons instead of snaps. So 0% chance what you have is a pre-production trials item. As the uniform started to be issued they changed some of the features, including moving the arm pocket and switching from copper headed snaps to plastic headed. There were a bunch of other differences too, but these are the two significant ones. The shirt you have has plastic headed snaps, which is another indication that this was made after production was started. As far as I know there wasn't anything made after production in anything other than the cotton/poly cloth mix until the Troppentarn uniform, which definitely isn't like the one you have.

Sooooo... long story short, hopefully you didn't put a lot of money into this one. I've got several unused ones sitting here and I doubt anybody will want 'em. Fortunately mine came along for the ride with other purchases

Thanks for the help, im gonna try and get some pictures once I find a camera that works, I took a look at the jacket and the buttons are painted metal and their is markings that show that their use to be flag patches on the sides at one time. Thats about all I can tell right now though.
CollectinSteve

My bad... the buttons on the chinese are indeed painted metal. However, I think they are some type of steel rather than copper like the issued German stuff.

The labels in mine are a thin, crinkly plastic instead of the cotton type found in the genuine issue. There's a lot of problems with the text on the labels as well.