This is the last of the old camos. I really loved it. I have got 3 variations of it, today I am gonna share this first pattern with down leggs pockets. It stills conserve the "amoeba" pattern, the difference is that it is completely in woodland camo.

This is the parka

This is me with one 2 pockets model

Great Uni Solideo, I have been looking for a set of these !!!
Solideo

panzerwerk wrote:Great Uni Solideo, I have been looking for a set of these !!!

I can possibly get one of this, have you got anything for trade?

I have a lot of things I am getting out of collection and some of them are pieces I have for 2 tiems, but at this moment I need some space in my war room. I will try to make a list including the camo dutch uniform I posted in Benelux post.

I agree with Steve....that is some VERY NICE examples of that uniform.....I really like how the trousers are made...and the parka...with the vertical pockets remind me of the French jackets..

Fantastic pictures!! I've never seen one in such great condition.

What other items do you know of in this pattern? I know of a backpack and hat, but nothing more.

Did all of the trousers have the old 8 pocket style, or were some made in the 6 pocket style?

I have been looking for one of these uniforms for more than 10 years. I now own a decent condition used uniform

The unfortunate thing is it is stuck in Spain at a friend's house (along with 40kg of other Spanish gear). Hopefully I'll have it in my hands within 2 months.

About item in this pattern Steven I know the rucksack for combat (little, the big rucksack for long time, Y suspenders, mags pouches (long for Z70) and short for cetme, and something more I have not in mind now, the cap too.

This is the combat rucksack, It was used overall in 4th Tercio (including Boel).

Did all of the trousers have the old 8 pocket style, or were some made in the 6 pocket style?

I forgot to answer this. There are no models of eight pockets in trouser.

There are 3 models of this uniform I know (but you know, as I said in pm, that never will say this priest is not my father when I talk of uniforms)

There is one early pattern as shown in photos which has 2 pockets in side thigs and two smaller ones in side ankles. NO pockets in buttom (ass), sorry for my English, sometimes I think cannot explain things like I would like.

Second pattern has 2 pockets in side thigs and loses the ankle ones´, but instead of that appear two pockets in buttom (ass).

3rd pattern is just the same than the 2nd model, but has no embroided epaulettes.

This pattern is actually more difficult to find that dark patterns because although Plan META in 1986 changed all uniformity rules in Spain at least in Legion we continued using dark camos and woodland camos. The question was that we used them until the stock allowed that.

At that moment in Tercio, more in African ones we lived our own, with strictely Legion rules but soft for combat uniformity, ay mid 90´s you could see people in combat exercises with desert chocochip (not many in African Tercio), dark or woodland amoeba and NATO patterns. I can say that even other units uniformities (I remember marine and ezapac patterns, because there were people that having joined before in other units, joined the Legion after that, and all was usefull for combat exercises).

When Legion Brigade formed, based on Fuerteventura 3rd Tercio (which came fron Canary Islands to Almería) many artillery, Logistic, etc...were forced to become legionnaires, so many officers with not Legion ideas stayed here. The new way of thinkinf made that image had to be performed, so old patterns were out of use. Out of reglamentary. But.... like woodland amoeba looked like similar to NATO pattern, was still in use for sometime, today you can even ocasionally see them when captain of Company allows in combat exercises.

Thats way this uniform has been in more use time than others, so many of them have been used until destruction and are so worth by legionnaires who think they still smell like old Tercio way of living.

Conclusion: More difficult to get one of this even than a dark (rocoso) pattern.

PD: There are many things more, but I have already talked so much and still havený learnt to resume

Thanks for the follow up information! Three different models... wow

Do not worry about your English descriptions. You capture the meaning very well.

Here are some pictures of a Boscoso backpack. Unfortunately, I did not purchase it when I had the chance: 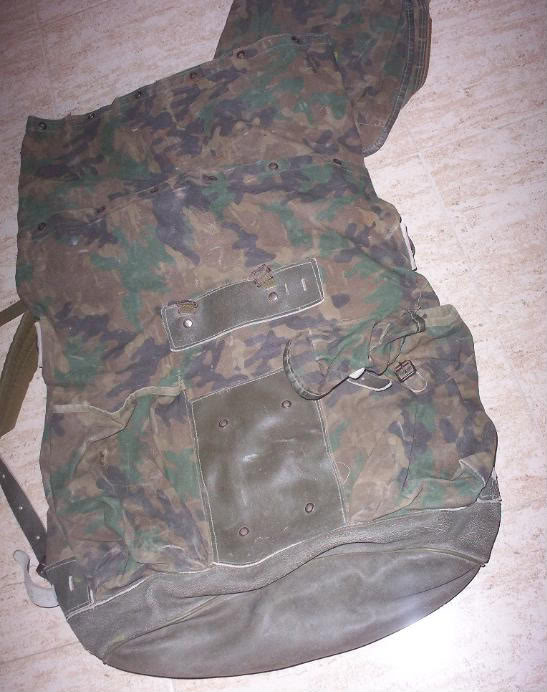 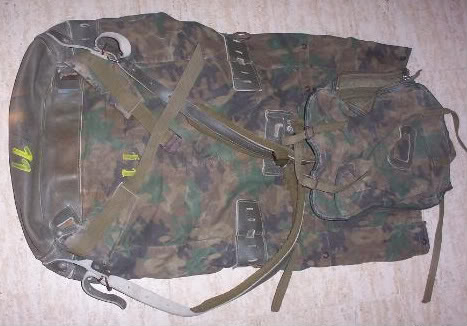 Do not worry about your English descriptions. You capture the meaning very well.

Here are some pictures of a Boscoso backpack. Unfortunately, I did not purchase it when I had the chance:

Don´t worry about it, I was the seller and I have it already ( I recognize the floor of my house). If I have time and the moderator allows me I will try to open a post with all items I am going to sell/trade.
CollectinSteve

Heh... funny how small the world is

Of course I am quite happy to see your list of sale/trade, even though I have nothing to trade that you want.

2 Diffrent shirts of boscoso camo, with and without embroided shoulder straps

The specialty badge over the right breast pocket is blank? Did the plastic symbols fall?

I agree with you... this is one of the nicest camouflage patterns ever made. Such a shame US Woodland was adopted instead.

Up the right pocket we used the patch of "destiny", the speciality of the Bandera we belong or the qualification grades.

So Tercio 1º used red color and 2nd Tercio used yellow color
There were 2 different camo patches to identify that: With borders in color of the Tercio and all in black "low visibility"

IV and II Bnaderas used non armoured vehicles, really we did not vehicles we werw more "Bootorized" than Motorized.

Other posibilities in that kind of camo was to find para qualification and theorical helicopter assault transport for X bandera, but this last patch was never used I think, it´s just theorical.

I don´t think boel used the oes patch too much, but sometimes they used camo uniforms in parades so it´s even possible to find a parade patch in their uniforms.

Obviusly when combat action non low visibility patches and shoulder flags were camouflaged with mud or even all marks of belonging Legion removed.

I put you some of the patches to make an idea. That not embroided uniform you were asking to me was mine, the patch simply vanished in actions and washes because its made in plastic over clothe, it was so usual.

Of course there are many other qualifications and different patches, but I have just put these wich coul be more used in this kind of camo, although all is possible as always in uniformity.
CollectinSteve

Thank you for the detailed information on the specialty badges. I have always found the colors and Banderas to be very confusing

I also thank you for "Bootorized". That is a very funny term I have not heard before.

Usually I have an special sense of humor that is so difficult to translate, not only for the languaje, but for the culture differences.

A simply guide for Legion actually:

1st Tercio "Gran Capitán": Located in Melilla (north Africa). I Bandera (II has recently been disolved, so there will be no breast speciality emblems). Color red.

There were also some groups depending the headquarters like Intelligence service, Music Band, Intendency...

Other destinies were stinguishid aswell...

All these in brigade use black color (except the third Tercio)

Well this is not boscoso, but is a Spanish Legion rare transitional shirt of old amoeba in dark camo. Still remains the pocket in arm with not spanish flag on it, no velcro in pockets and elbow reenforcements like aerly models...the main difference is that appears royal crown in embroided emblem of epaulettes.

Interesting! I checked my own examples and the shirt I have (arm pocket, no flag) has no crown. So I have the more common Franco era version. Thanks for sharing the information.

CollectinSteve wrote:Interesting! I checked my own examples and the shirt I have (arm pocket, no flag) has no crown. So I have the more common Franco era version. Thanks for sharing the information.

Don´t misundestand something, not always Franco period was relationed with not using crown. Although most Franco period items in Legión are with no crown (royal crown) you can find items, I specially mean a king of buckle with imperial crown.

You can also find royal crown in Legion emblems from 1920 to 1931. And even from Civil War (because some legion members were pro reinstitucionalization of monarchy)even to 1943 (these are rare to see but you can find them.

Other thing, have never seen a dark amoeba pattern used by legionnaires after Franco died. The emblem embroided in this early patterns are without crown and with the same design that used in Franco period Sarga uniforms, but not used in Franco period, probably just the designers had embroided them or just kept the model done until first time appeared the royal crown in Legion. First notice I have of it was in 1977. Only camo uniform I have ever seen during Franco period by legionnaires was de desert one.

Finally I got a mediun size to wear. Boots and belt is not the one used in that period.

panzerwerk wrote:Great Uni Solideo, I have been looking for a set of these !!!

I can possibly get one of this, have you got anything for trade?

I have a lot of things I am getting out of collection and some of them are pieces I have for 2 tiems, but at this moment I need some space in my war room. I will try to make a list including the camo dutch uniform I posted in Benelux post.

Solideo I wish I had money or something to trade , I am just getting by right now , hopefully things will pick up , you and Steve G are really giving me the Spanish Flu !!!!!!

Solideo I wish I had money or something to trade , I am just getting by right now , hopefully things will pick up , you and Steve G are really giving me the Spanish Flu !!!!!!

Who knows, actually I am selling many things from my collection because a I am going to limit it to Spanish Legion and only one variation of each uniform. I have left many coes and Ezapac items, helmets, 1 complete boscoso, sahara pattern, sarga from Franco period complete, 1 rocoso transitional shirt, 1 complete rocoso, para jumping uniforms in both colours, etc etc...