Thank you guys, appreciate your comments.

These are some nice pieces .  Foul weather set was made only about 4  months ago !!

Having had the time to examine the HD set , it looks to me  more like it has  the cut of 2nd type ( amoeba ) Estonian uniforms  rather than a BDU type .

Right down to the arm pocket and the  elastic gores at the back.

Very possibly the HD woodland uniforms were themselves early army issue but were phased out when the vertical zippered chest pocketed uniforms were introduced.
Only speculation, but it would make sense for HD units to be issued simpler and probably cheaper to produce earlier uniforms.

Oh, for sure it is the same as the "traditional" cut that goes back into the 1990s. I called it "BDU" out of laziness to separate it from the zip type introduced with the digital uniforms.

Up until now my presumption has been that the "traditional" cut digital uniforms (both desert and temperate) were transitional between the amoeba type and the vertical zip cut. They certainly are very rare. Especially the desert type. It's not too uncommon for a new camouflage pattern to see some limited production in an older style cut before transitioning to a newer style cut. The Lithuanians did it with their desert uniforms, for example.

However, I'm now suspicious that your information is correct and that this uniform was for the Defense League. On my part, the only pictures I have of it in use are from a very unfortunate series of photos of Defense League personnel standing in review at some sort of event. I say "unfortunate" because the members were largely physically unfit for military service and/or not the best looking soldiers in other respects. Russians had a field day with the pictures at the time.

Whatever it is, the uniform is rare and a fun one to have! Congrats.

Funny; laziness was the leading  factor in my referring to the Defense League  set as  a BDU type as well ( expediency another ) .

I agree  original issue Estonian digital  woodland and desert uniforms were of this type until the introduction of later cuts ( and patterns ).

Received some info that confirms it today .  Pretty much confirms  some of the things we have figured out..

These type of uniforms were first tested in 2005-2006 by the Scout Battalion ( Estcoy 3, B Coy ). They were of lightweight cloth with a green interior.

There were supposedly some difficulties with the Canadian government over pattern copyrights.

Ministry of Defense ordered a large stock of these types of uniforms but they were not well received by troops who wanted modern cuts with  better materials.

As we have seen the troops got what they wanted.    When new uniforms were  issued  stocks  of the earlier uniforms  were transferred to the Defense League .

The  early type is now obsolete and no longer issued  to any unit although some defense League  troops still wear them.


I agree about the unfortunate Defense League post that you are referring to.  Anyone willing to defend his country is an honorable man no matter how fit ..

This explains why the Defense League received the digital uniforms so quickly. In fact, the "unfortunate" pictures were the very first ones I saw of the new pattern. Certainly they had them while most of the armed forces were still wearing amoeba type. Normally one would expect an organization like this to get them dead last.

This makes a lot of sense. Also, if I didn't say it before... my uniform also has Defense League badges on it. When I received it there was nothing on it, but the badge outline is distinctive and was clearly visible.

Here is a comparison of Cadpat and Estonian temperate patterns..

2 of the colors indeed  seem to be very similar...

Nice that we have good info on these early uniforms. I find the pattern very interesting  and the uniforms  well made.. 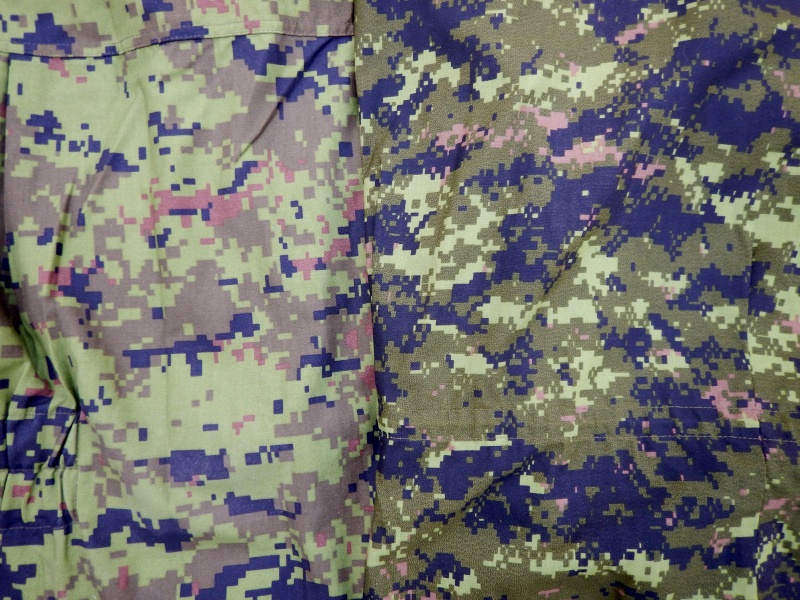 I'm wondering if the objection was to the desert pattern since that is the one that served alongside Canadian troops in Afghanistan. That pattern, unlike the temperate one, was changed significantly. Though I don't know why since I don't think it looked a lot like CADPAT.

I'm almost certain the Canadian government only objected to the woodland pattern; Estonian Arid is not even close to Cadpat Arid.

And as you mentioned , Estonian Arid was significantly modified at least once.

Going somewhere else again, I found early  Estonian winter trousers with a purple liner like the liner of the parka Raff posted on this thread.

Trousers  are  genuine issue.      Perhaps purple liners were official issue after all ???

I think I have a removable liner in this material. Somewhere

This one came from a trade with a member of this forum..

These early uniforms ( type 1s ) were general issue, but also used by Defense League units (as this one was ) before HL units were issued with their own  distinct uniforms.

This particular set was used by a junior sergeant of the Defense league from the city of Tartu . 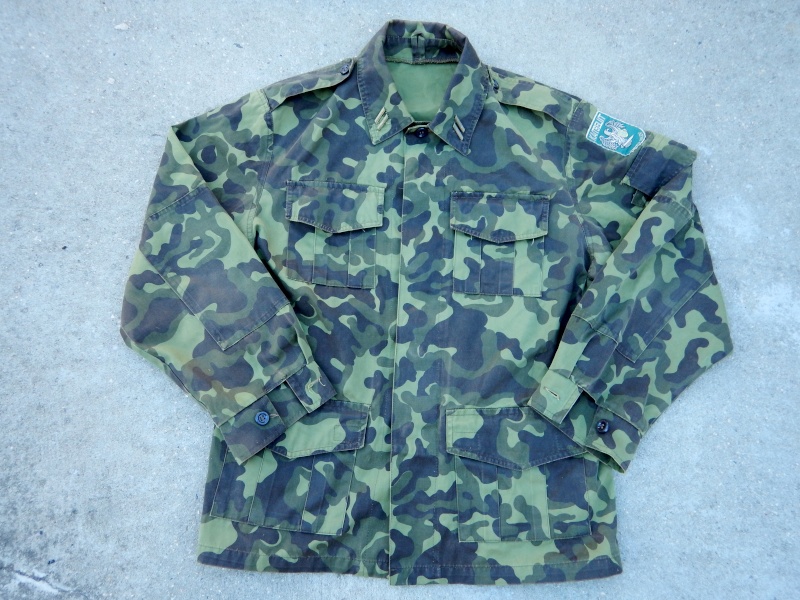 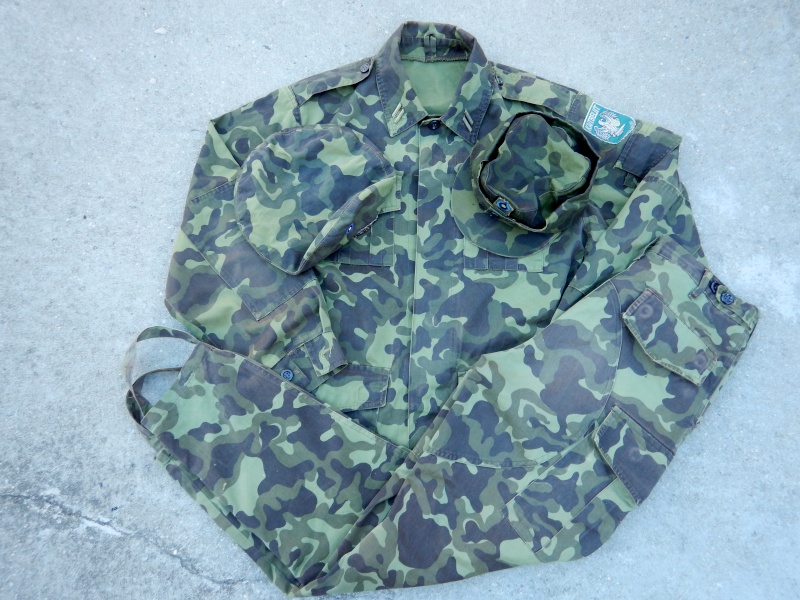 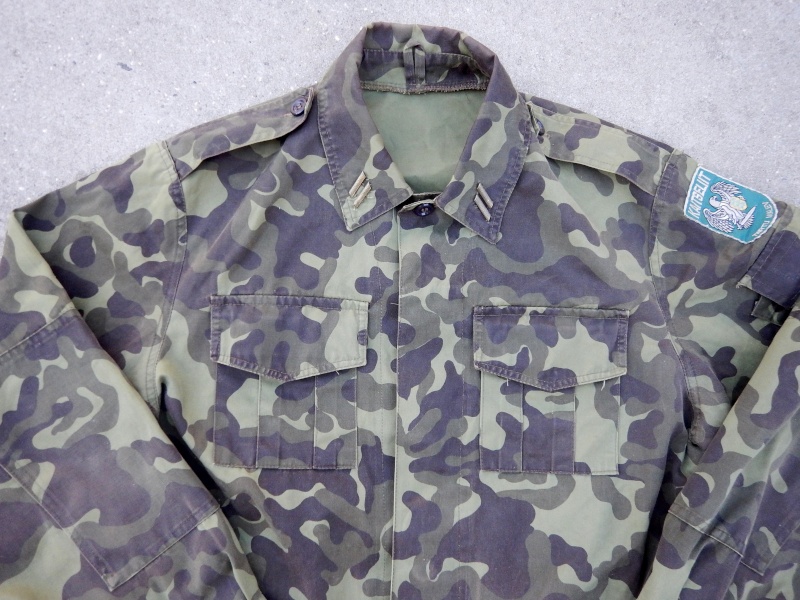 I'm glad this beauty has a nice new home

The Defense League badge on this jacket is not one I've seen elsewhere. Not too surprising since the Estonians went through a phase of heavy experimentation with badging.

Looks like this early winter uniform is up for sale again...

certainly lovely stuff to be seen here. I particularly like the older camos. nice stuff. thanks for the info and link Sal. it starts for 80EUR that's surprisingly a very good price for an eBay item of such beauty nowadays.
ripcord

Alex, My pleasure,I've been looking at that listing awhile...

Looks like a decent deal...I would have grabbed long ago it if it were not in Europe..

Someone should before it disappears...

Looks like the price has been reduced to 50 Euros..

It goes off in an hour..But I bet if nobody buys it today, it will be relisted.

This is a bargain..

EUR 50 is an excellent deal! However, it underscores the general lack of interest in big, bulky, heavy winter uniforms. I can tell you that if I ever purge my European collection the first things to go will be the winter uniforms. I probably will take a loss on them since I probably spent +50% of the value on shipping and I doubt very much I'll get 150% of what the uniform is worth.

Per Steve's request, here's the tag off my new "Estguard" set tags. 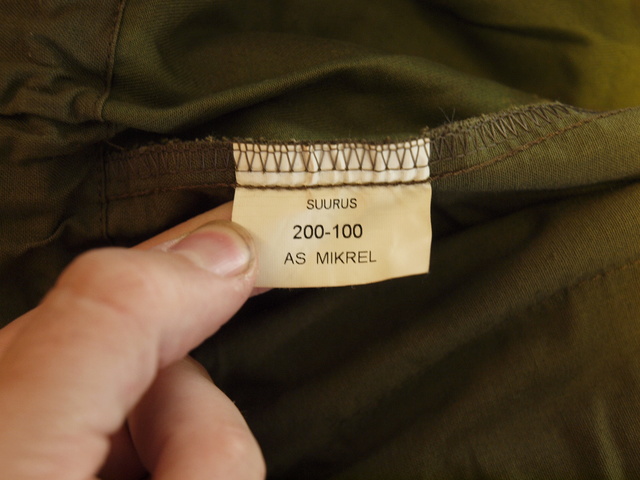 CollectinSteve wrote:Following up with my comments about the small batches. There appears to be two distinctly different AS MIKREL uniforms:

1. Made from more-or-less standard military cotton cloth. Chest epaulette instead of shoulders. Camo ankle reinforcements instead of green nylon.

2. Made from polyester type cloth. Shoulder epaulettes and not anything on the chest. Embroidered "Estonian Defense Forces" over left breast pocket. Green nylon ankle reinforcements instead of camo.

Mine seems to be a combination of both.
>Camo ankle reinforcements
>Shoulder epaulettes
>Polyester Cloth
>No Embroidery

Other things are, Pants pockets are all velcro closure and The jacket has has one arm pocket with pen holder. 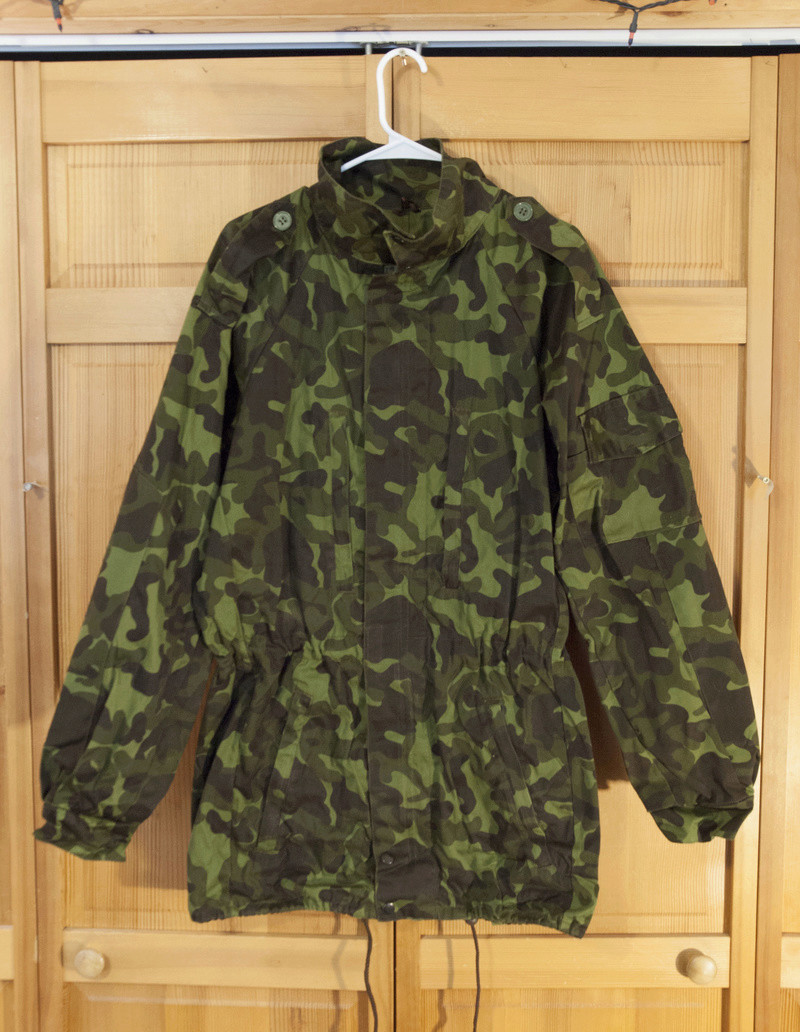 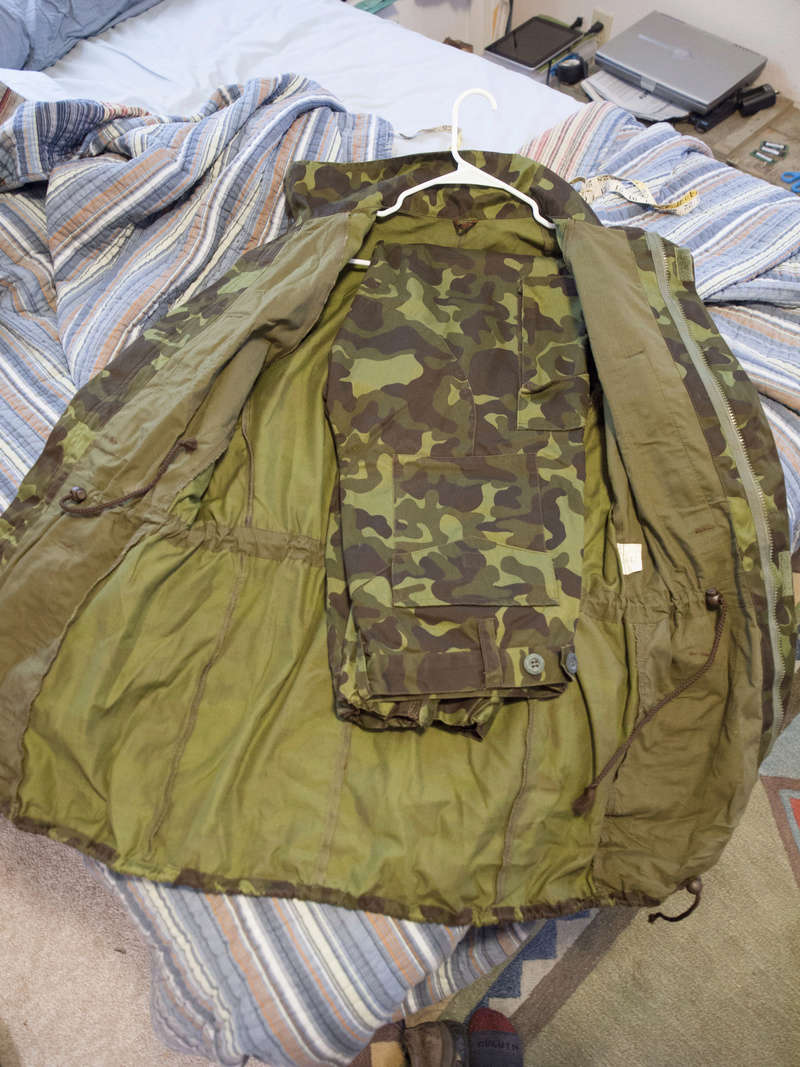 For trade/sell these estonian (non use anymore) headgears
First you can see that the (blue,black and white bullseye is removed and replaced with kuperjanov skull and someone is removed the tag inside.. 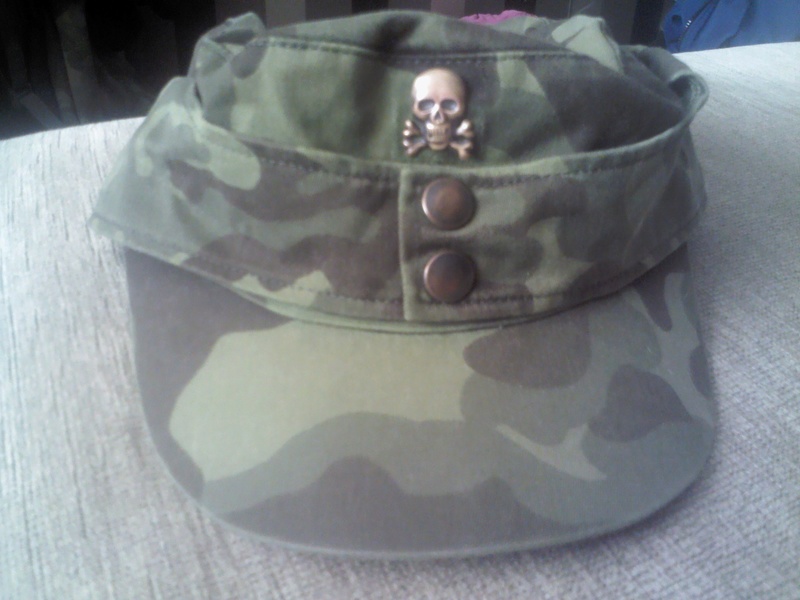 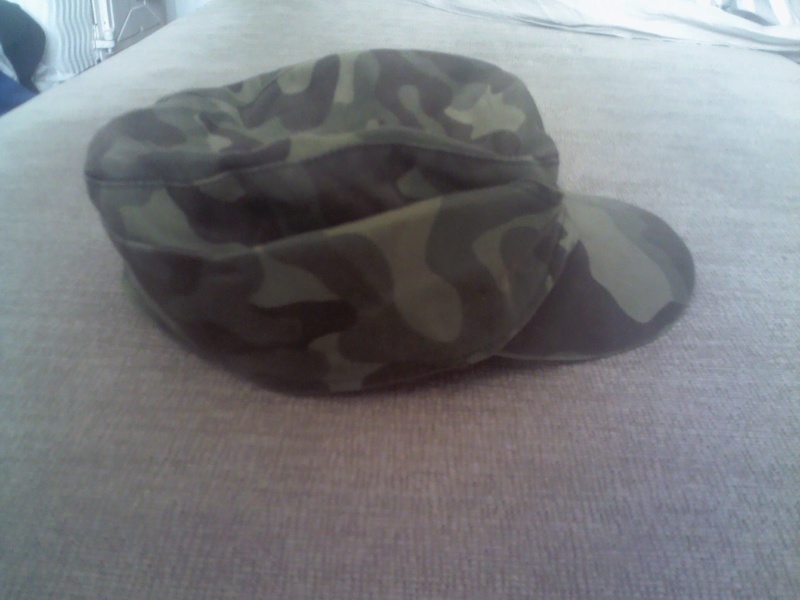 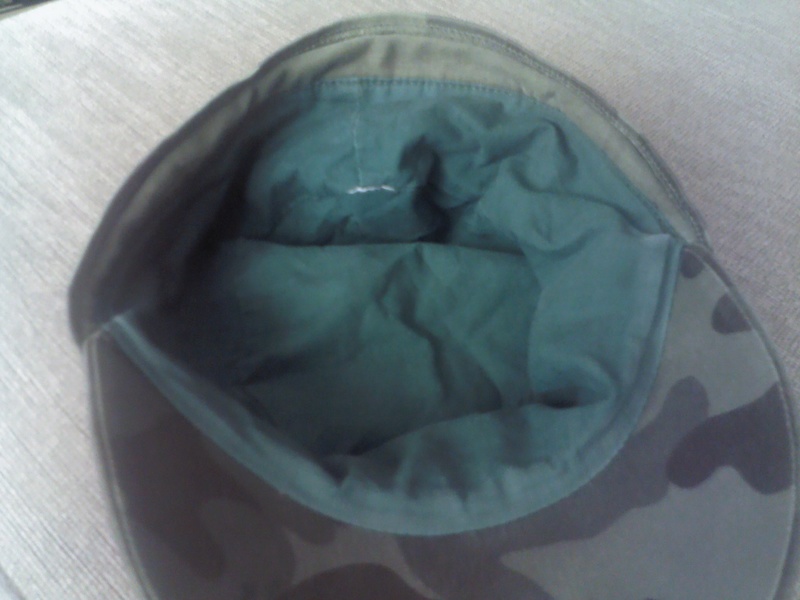 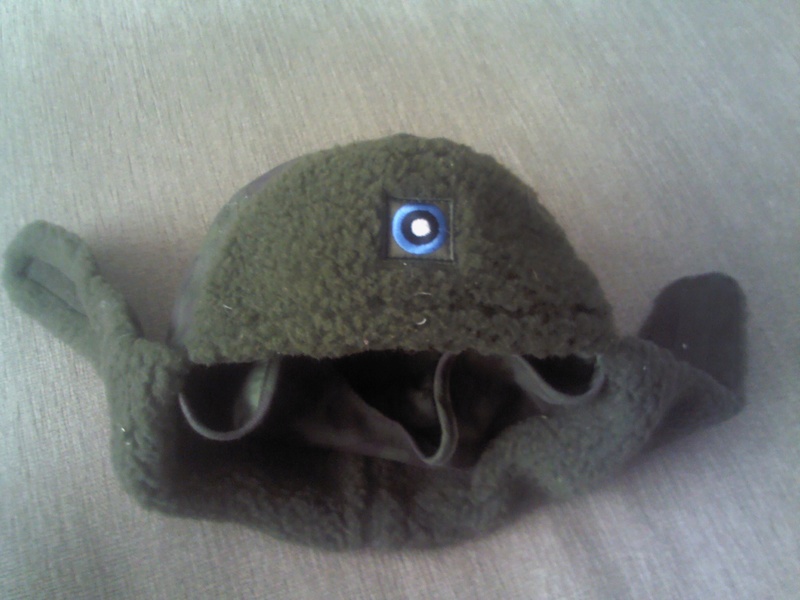 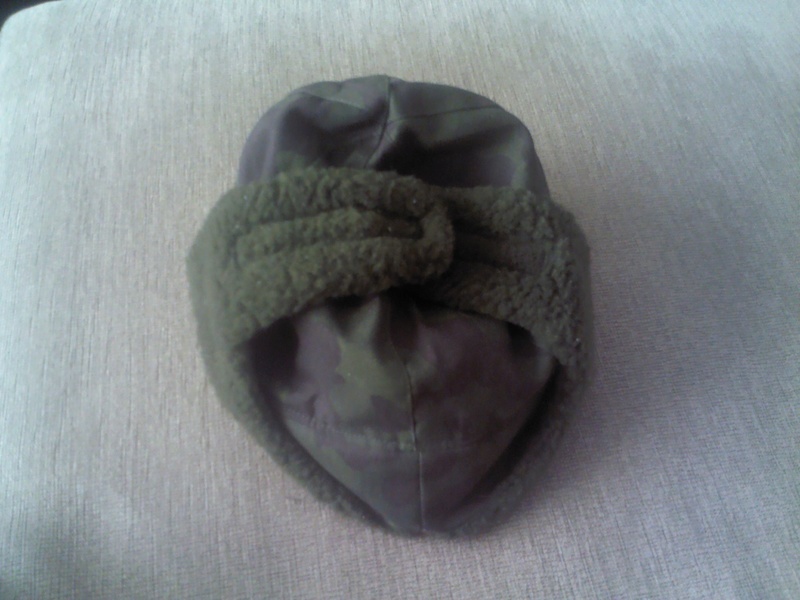 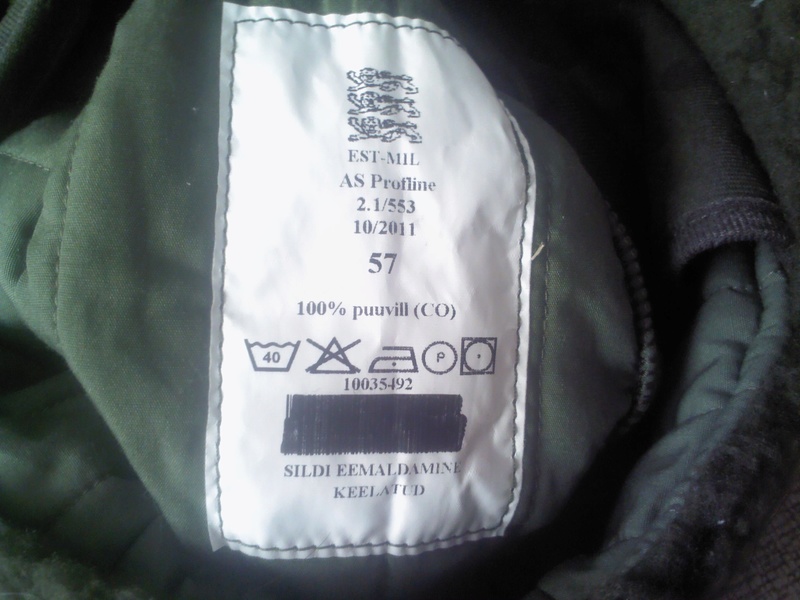 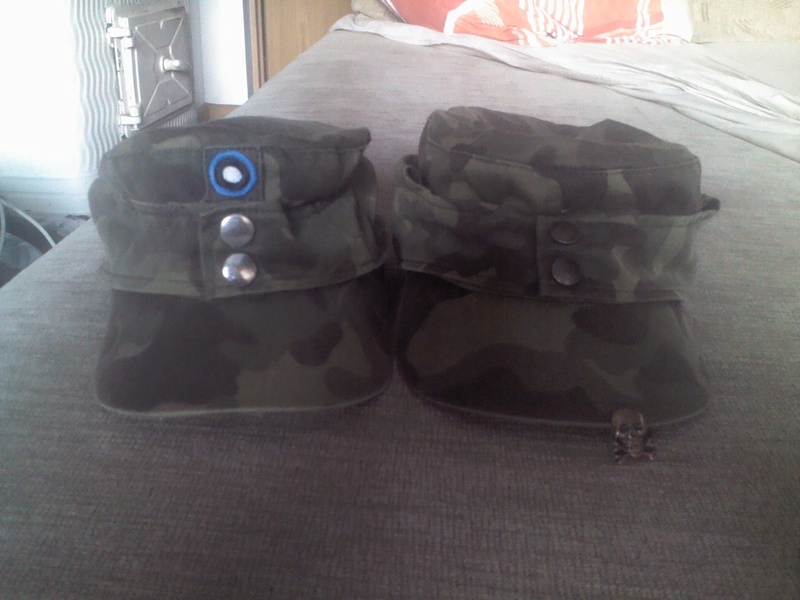 Just cant get enough of this pattern, 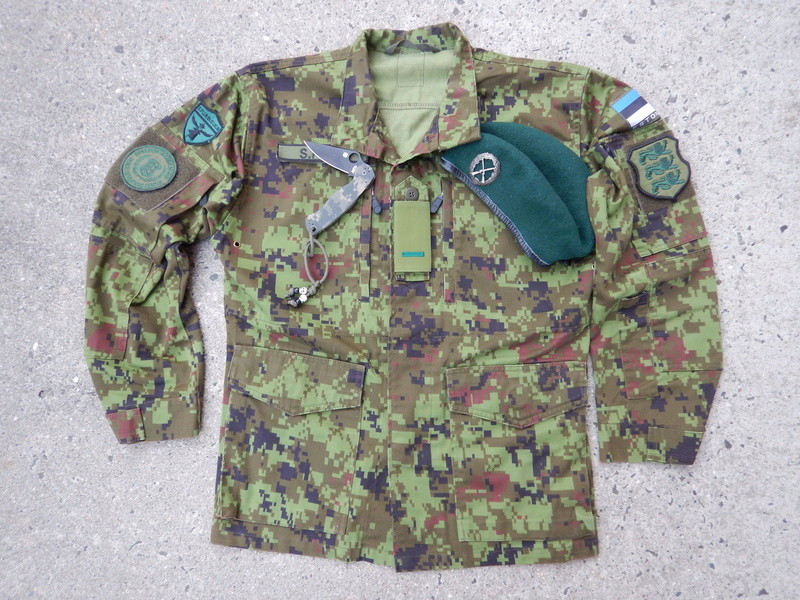 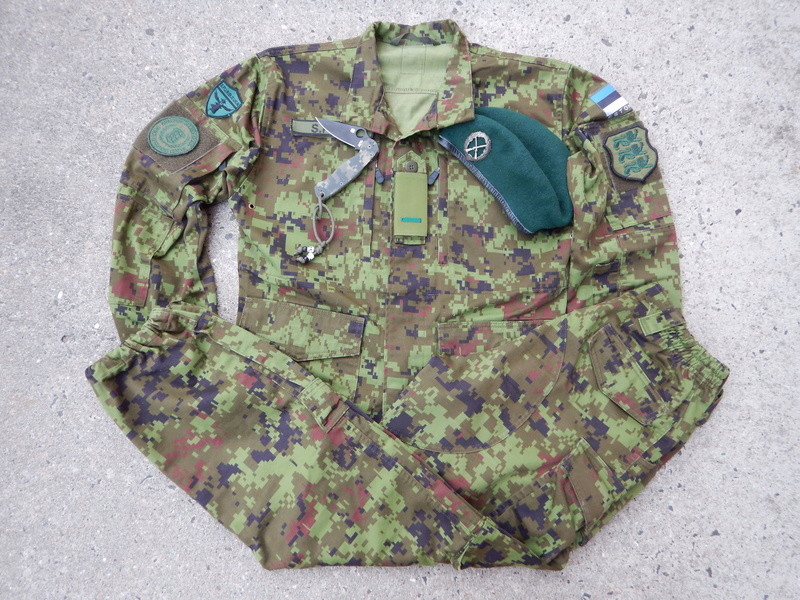